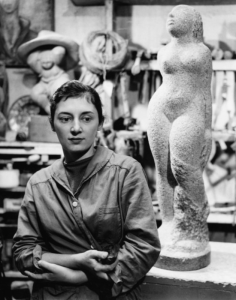 Lorrie Goulet is an American sculptor, painter, poet and philosopher. Born in 1925 in New York City, she is known primarily for her direct carving of stone and wood, and her natural and spiritually inspired works which often celebrate women, families and cultures. She is regarded as one of the pioneers of women sculptors, and her works are presented in museums, institutions and galleries including The Whitney, Joseph H. Hirshhorn Museum & Sculpture Garden, The Smithsonian American Art Museum, The National Academy of Design, National Museum of Women in the Arts, Corcoran Gallery, the Museo Nacional Centro De Arte Reina Sofia, Madrid, David Findlay Jr. Fine Art in NYC, The Kennedy Galleries in NYC, The Harmon Meek Gallery in Naples, Florida, and many more.

A prolific writer, Ms. Goulet’s works include philosophical and educational writings and books, and poetry. A teacher and mentor, Ms. Goulet was educated at Black Mountain College in the 1940’s and taught at the Art Students League of New York for many decades. She continues to create art, publish her writings, and teach in her studio in Chelsea, New York.

Amongst the many quotations Ms. Goulet is known for is this: “I believe the source of our art lies on our inner center of being…the core of our awareness. From this center flows our power of creativity, the mystery and magic of our art. I believe that art is the realization of the dynamic energy and order of the universe…as perceived by the individual…as reflected and made whole in the visual images we create.”

Ms. Goulet’s arts studies began when at age seven she met Aimee Voorhees at the Inwood Pottery Studio in 1932 and continued working with Ms. Voorhees for four, formative years. Her first group exhibition included two of her ceramic figural groups included in a children’s exhibition in 1936 at the New York Museum of Natural History.

Shortly thereafter, her family moved to Los Angeles, California, where she continued her education. In 1940 she became an apprentice to Jean Rose, a highly respected ceramicist in Southern California.

In the autumn of 1943, Ms. Goulet entered Black Mountain College, North Carolina, where she studied painting and drawing with Joseph Albers and weaving with Annie Albers. In the summer of 1944, she met Jose de Creeft, a visiting sculptor and instructor, and in November 1944, Ms. Goulet and Mr. de Creeft were married. Two years later, they acquired a farm in Hoosick Falls, New York, where they worked part of each year until 1968, and gave birth to artist Donna Maria de Creeft.

Ms. Goulet’s first solo exhibition occurred at the Clay Club Sculpture Center, New York, in 1948. Kennedy Galleries in New York began presenting her work in 1971, and a regular stream of solo exhibitions continued through 1986.  Her work continues to be presented by David Findlay Jr. Gallery, in solo and group exhibitions, and the Harmon Meek Gallery in Naples, Florida.

Her work has been frequently represented in group shows since 1948, among them, a number of Annual Exhibitions at the Whitney Museum of American Art, New York, and in the fine arts pavilion of the New York World’s Fair of 1965. Ms. Goulet and Mr. de Creeft spent the winters of 1949 and 1950 in West Palm Beach, Florida, where she received first prizes in both aWest Palm Beach Art League exhibition and an exhibition of the Society of the Four Arts, Palm Beach. Goulet’s first position as a teacher of sculpture was with the Museum of Modern Art’s Peoples Center, New York, in 1957, and she also began teaching privately in that year.

From 1961 to 1975 she was on the faculty of the New School, New York, and began teaching at the famed Art Students League of New York starting in 1981 until 2004. CBS Television aired twenty-three program segments featuring Ms. Goulet’s teaching, with demonstrations for children for a program called “Around the Corner” sponsored by the New York City Board of Education. These programs were aired between 1964 and 1968.

Ms. Goulet’s work is characterized by figures, predominately of women, the forms of which have an organic relationship to the stone or wood from which the sculptor has released them. She is also a painter, philosopher and poet with several books to her credit, and with several more in development.

Ms. Goulet has completed a number of public sculptures at monumental scale, in a series of facades commissioned by the City of New York for several of its public buildings in the Bronx including the Branch Public Library at 173rd Street and Grand Concourse, in ceramic, 1958; Nurses School and Residence, Bronx Municipal Hospital, 1961; and the 48th Precinct Police and Fire Station Headquarters, in stainless steel, 1971.

Ms. Goulet has had scores of solo exhibitions at museums and galleries. Her sculpture can be found in the permanent collections of museums including the Wichita Museum of Art in Kansas, The Smithsonian American Art Museum, National Academy of Design in New York City and the Joseph H. Hirshhorn Museum & Sculpture Garden in Washington D.C. In 1998, she was honored by the National Museum of Women in the Arts in Washington D.C. with a solo exhibition titled “Fifty Years of Making Sculpture.”